Book your next holiday now!

Ace Travel Services Kefalonia: We provide a broad range of travel services on the island of Kefalonia... 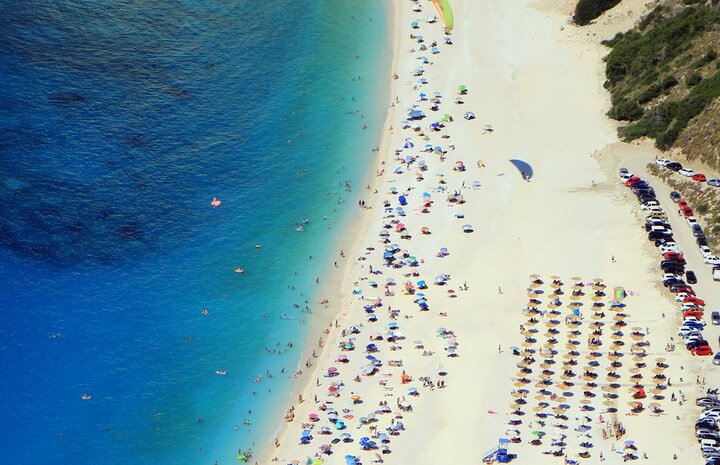 Undoubtedly the most famous beach in Kefalonia, Myrtos beach is the jewel of the island. Situated on the north west of the island, this beach boasts not just crystal clear waters but fantastic views out to the Ionian Sea.

You will find two viewpoints located high above each side of the beach offering magical photo opportunities. The small road to the beach meanders down the hillside to finish at the parking located at the beach. From the viewpoints above the beach deceives by presenting white sand against the azure waters yet once on the beach you will discover that Myrtos beach is actually a shingle and pebble beach.

Care must be taken when swimming at Myrtos as the deep water also brings some strong currents into the cove. 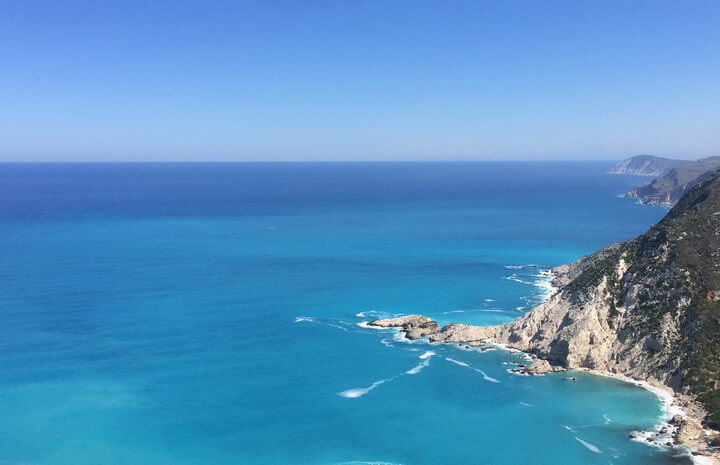 Petani beach although not as well-known as Myrtos, it offers not just a fantastic backdrop and clear waters but its location at the top of the Lixouri Peninsular captivates visitors with stunning sunsets. With two tavernas located on the beach, Petani beach is great for afternoon swimming and enjoying traditional cuisine as the sun sets over the island.

Hidden around the coast just 3km from Sami town, Antisamos beach is a picturesque cove style beach. The pebble beach is surrounded by lush green trees on the hills on one side and the crystal waters the other side. The beach is great for snorkeling and was made famous after it was used in the film “Captain Corelli’s Mandolin”

Situated near Fiscardo in the north of the island, Dafnoudi beach is a secluded cove accessed only through the small, natural valley. The small, pebbly beach is lapped by the blue waters inviting you to take a dip. A beach popular for couples looking for a quiet retreat.

A popular, well organized beach, Ai Helis located in the resort of Svoronata is great for families as it offers parking, beach equipment such as umbrellas. The sandy beach is lapped by clear, shallow waters. 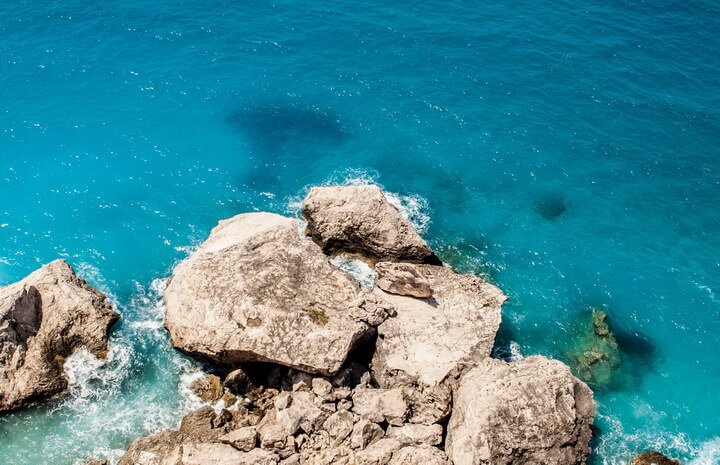 Located on the far west side of Kefalonia near to the Kipouri Monastery, Platia Ammos beach is truly unspoilt. Only accessible by boat or descending the 400 steps, the mix of small and large pebbles entice those wanting a completely traditional beach experience. There are no facilities here so make sure you take your umbrella and own supplies.

Situated a few kilometers from the village of Fiscardo, Agia Jerusalem is a small rocky cove perfect for those wanting to snorkel the crystal clear waters. Named after the small chapel that used to stand on the side of the beach, Agia Jerusalem also offers mooring for a few small boats and a very popular tavern serving a variety of foods.

Located in the foothills of the Omala Valley, is the Monastery of Saint Gerasimos, the Patron Saint of Kefalonia. Saint Gerasimos came to the island around 1555, where he first lived in a small cave located in the now known resort of Lassi. Saint Gerasimos moved inland close to the village of Valsamata and established a monastery to care for the poor and provide charity.

The body of Saint Gerasimos is kept in a glass casement and is protected, in the small church located to the newer, larger monastery. Saint Gerasimos’ body was buried twice and when exhumed it was still intact leading the church to ordain him as a saint. Many Kefalonians still pray to him for protection and healing and many people are named after him as a tribute.

Every year on the 16th August, the island celebrates the Feast of St Gerasimos, where the monastery holds sermons and a parade, where the casket holding Saint Gerasimos’ body is passed over the ill and the sick as to help them heal.

The Monastery was founded in 1587 by the Countess Roxanne when an icon of the saint Andreas was found under a fruit tree. In 1579, three local sisters brought the land and build a small nunnery. In 1639, a Greek Romanian Princess named Roxane, re-named Romila, started her monastic life as a nun. Roxane came from a wealthy family and brought with her not just money to invest in the nunnery but also a holy relic from Mount Athos, the right foot of the Apostle Andrew, which had the hole from the crucifix.

In 1988, a museum was built in the ground to house art treasures from the 1300-1900 AD along with frescos, icons and paintings from abandoned churches across the island.

The Kipouri Monastery was built in the late 17th century by the Archbishop of Paxi Chryanthos and is located around 15km from the town of Lixouri. The name “Kipouri” means monastery of gardens, due to the many gardens that surrounded the monastery that the monks at the time cultivated. Now, only one monk remains at the Monastery as a caretaker and protect the various ecclesiastical relics and icons.

If you visit the Monastery, make sure you have your camera handy as the views and sunsets from the Monastery are said to be the best on the island. 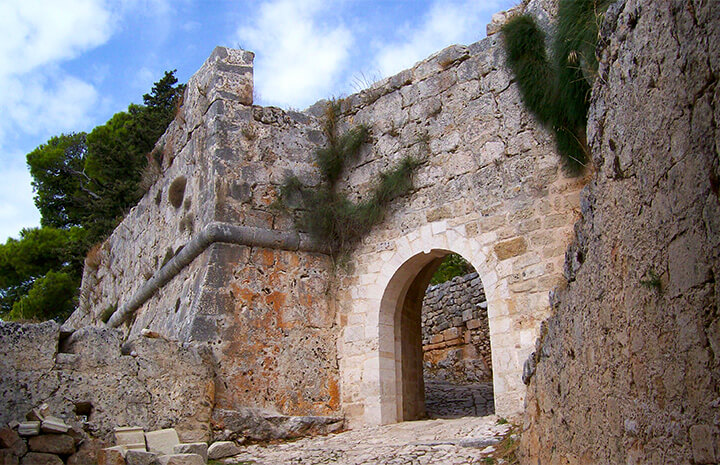 St George’s Castle (Agios Georgios) also known as Kastro, is located in the area of Livathos around 12km from the capital of Argostoli.

This small village is famous of its quaint, traditional houses leading up the hill to the Venetian fortress of St George. The fortress was initially fortified by the Byzantines during their rule over the island but in the 16th century the Venetians added defensive walls and completed the Castle. The village is also home to two churches dating back from the medieval times, adding to the history of the village.

The fortress was once the capital of Kefalonia due to its location, giving commanding views across the south of the island and the mountain range of Aenos. In 1757, the status of Capital was given to Argostoli, further down the hill due to its direct access to sea and helped create stronger defenses for the island.

Today the village of Kastro, welcomes visitors to explore the fortress, take in the views and complete their visit with coffee and traditional foods in the couple of tavernas located in the village. 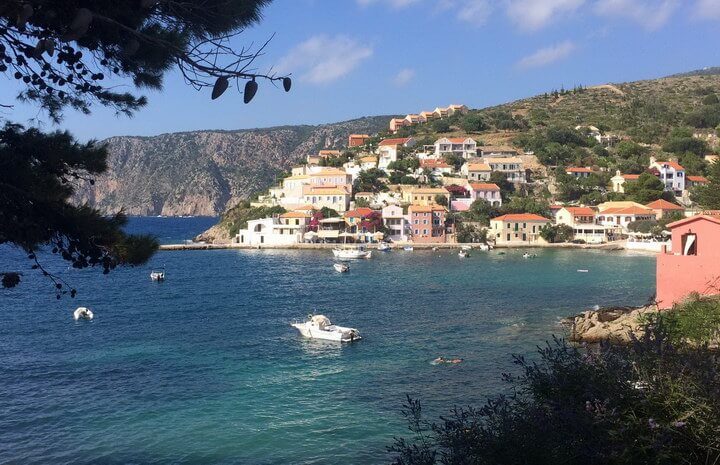 The village of Assos, located on the northwest of Kefalonia, is a small village dominated by the Fortress of Assos. The village is located one side of a narrow peninsular and on the opposite side is the fort set high on the hill.

The Venetians built the fortress around 1593 in response to the islanders needing further defenses from pirate raids after seeing the protection Agios Georgios had given in the south side of Kefalonia. 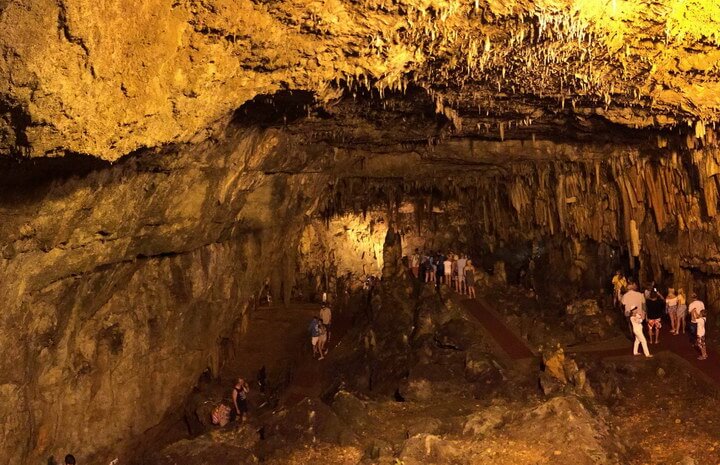 As you slowly descend down into the Drogorati Cave, you will feel the drop in temperature and the feeling of being transported to another realm. The mix of golden colours from the interior of the cave will leave you mesmerized.

The geological phenomenon of the Drogarati Cave was discovered over 300 years ago due to an earthquake revealing an underground entrance to a large cave. On further investigation, the cave was dated back to 150 million years old. All the chambers are home to stalactites and stalagmites due to the rainwater mixing with the lime deposits in the earth before emerging into the cave.

The cave, located over 60 metres below ground comprised of a large chamber and several smaller chambers. The main chamber is around 900sqm and is known as “Sala of Apotheosis” due to its fantastic acoustics. While in Kefalonia, the Opera singer, Maria Callas visited the Drogorati cave and was so in awe of the acoustics she held a concert in the main chamber. After this concert, several further music events have been held in Drogorati Cave. 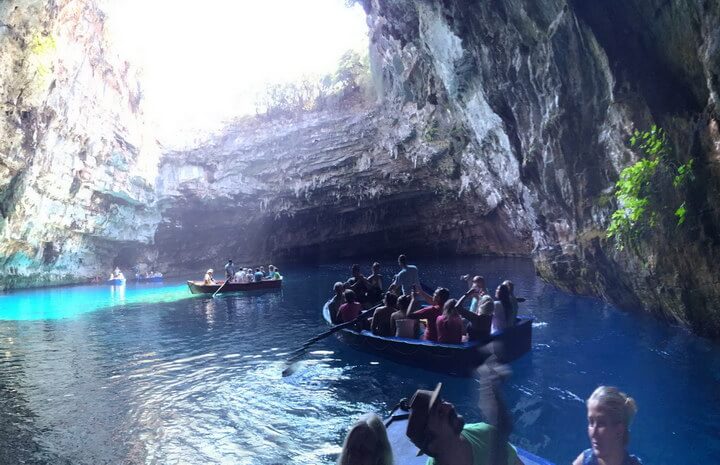 Located not far from Kefalonia’s other geological phenomenon, the Drogorati Cave, the Melissani Lake, although also a cave in its formation it offers a much lighter, romantic experience.

The discovery of the Melissani Lake was much more recent then the Drogorati Cave in 1950. Three years later, due to a large earthquake that shook the island, the roof of the Melissani collapsed and revealed a subterranean lake. Geologists who visited the island in 1962  carried out various test and discovered that the source for the water in the lake came through swallow holes known as “Katavothres”, located close to the capital of Argostoli, over 35 km away. The sea water is sucked into the swallow holes and travelled for over 13 days where the minerals in the land formation of the island broke down the sea water molecules down which created a fresh water in the lake.

The main chamber has the lake where you can take a row boat around to see further inside the second chamber which hides the stalagmites and the stalactites where the specks of light from the hole in the top of the cave create a multitude of colours throughout the lake.

The mountain range of Aenos is the 3rd largest mountain range in Greece and is the only Greek island to have a National Park. The peak, Megas Soros is 1,628 meters above sea level and the total area of the park is around 3,000 hectares.

The area was given National Park status in 1962 and the island has since worked hard to maintain the ecosystem of the area.

The park is infamous for the special type of fir tree that grows there. The Abies Cephalonica (black fir) can only be found at Aenos and far flung parts of Russia. The park is also home to a group of wild ponies, which live on the south west of the park.

In recent years, the new Environmental Centre was built near the summit, open to give more information about the wild flowers, various species of birds and reptiles found around the park and to provide maps showing the various walks to help further explore all the park has to offer.

At Megas Soros you will be amazed by the panoramic views of the island and on a clear day the views over its neighbor, Zakinthos and its sister island, Ithaka.